Let All the Earth Cry Out to God with Joy!

Let All the Earth Cry Out to God with Joy! 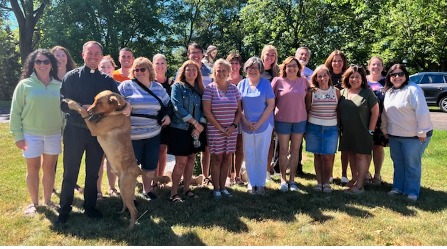 There is so much to rejoice in! Just last Friday, as I got out of morning Mass, I received a phone call from our principal, Katie Dougherty, asking for me to have Mass for a Principal Retreat that was happening that week as the assigned priest couldn’t make it. It was a joy to pray and to celebrate the Eucharist with the leaders of our schools in the diocese. It gave me great joy and hope to know that our schools are in good hands. Whenever you meet a leader of our schools, whether here or at other parishes, remember to thank them and pray for them. Here’s a picture of the group.

After Mass, they journeyed to the Rhoda Wise Shrine in Canton and asked if I could join along. I did. The story of Rhoda Wise is a wonderful one. If you have never heard of her, know that she is on track for becoming a Saint! She was a mystic and stigmatic, which is a condition that caused her to bleed from her head, hands and feet, reminiscent of Jesus’ crucifixion wounds. According to reports, her condition began on Good Friday, April 3, 1942, and continued every Friday for two years except when Christmas fell on a Friday. Here’s a picture from the shrine. 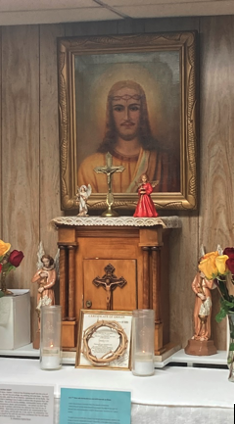 On Thursday, July 7, which is her anniversary of death, there will be episode called “They Might be Saints,” which airs at 10:30 A.M. on EWTN. On the same day, there will be a 6:00pm Mass at St. Peter’s in Canton followed by a showing of the episode at the Basilica of St. John Social Hall. This might be a great way to learn more about our local saint in the making!

We need to continue to pray for peace! Thanks!